Aboriginal, the first known inhabitants of Australia for over 40,000 years

Historians believe that Aboriginal have been there for 40000 years, but other evidences put it to be much longer than that.

They have been there since time began.
And they came straight from the creative ancestors’ dreamtime.

Since ancient time , they kept the earth as it was. Their culture is about the roots of creation.

They refer to forces and powers that created the world as creative ancestors.

Their beautiful world has been created only in accordance with the power, wisdom and intentions of ancestral beings.

Who are the Aboriginal People?

The first recorded human inhabitants of the Australian continent and its neighboring islands are indigenous Australians. The term covers Torres Strait Islanders as well as aborigins, who make up approximately 2.5% of the population of Australia.

The latter term applies generally to people living in continental Australia , Tasmania and some of the nearby islands. The Torres Strait Islanders are Australian indigenous people who live between Australia and New Guinea on the islands of Torres Strait.

Indigenous Australians are believed to have arrived between forty thousands and seventy thousands of years ago, but indigenous tradition claims “they have been there from the beginning of time.”

The word ‘Australian Indigenous people’ includes several different communities and societies which are further divided into community groups with unique cultures. These communities use fewer than 200 languages — all but 20 are very much at risk. The number of Indigenous Australians was estimated to be up to 1 million before the arrival of British colonists.

It was later capitalized and used as a popular term for all the indigenous Australians. Strictly speaking, the “native” is the name and the “native” is the adjective shape; however, the latter is sometimes used as a substantive. Notice that the usage of “Aboriginal(s)” or “Aboriginal” has acquired in this context , i.e. as a substantif, some sectors of the culture that consider it to be insensible and even derogatory, negative and even derogative connotations.

“Aboriginal Australians” or “Aboriginal people” are more appropriate and right, even though this is often interpreted as a term that can be avoided by its historical connection with colonialism. “Indigenous Australians” has found increasing acceptance, particularly since the 1980s

Aboriginal Australia Languages
There was no indication that the indigenous languages of Australia and Tasmania are related to any other language other than Australia. Different communities and a similar number of languages and dialects existed between 350 and 750 at the end of the 18th century. Less than 200 Australian Indigenous languages remain in use at the beginning of the 21st century, all but about 20 of them being very much threatened.

In the north, stretching from the Western Kimberley to the Gulf of Carpentaria, are found a number of groups of languages which have not been shown to be related to the Pama-Nyungan family or to each other: these are known as the non-Pama-Nyungan languages. While it has sometimes proven difficult to work out familial relationships within the Pama-Nyungan language family many Australianist linguists feel there has been substantial success.

The position of Tasmanian languages is unknown, and it is also unknown whether they comprised one or more than one specific language family, as only a few poor-quality word-lists have survived the impact of colonisation and social dislocation.

These photos from an indigenous Australia camp in the 19th century demonstrate that in the cooler and warmer areas of Australia during the European settlement, the indigenous people live in various ways. 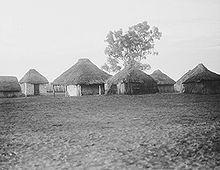 The general view among scholars on people ‘s entry into Australia was 40,000 to 50,000 years ago, but was not so generally supported in a possible range of up to 70,000 years ago. It is estimated that a minimum of 315,000 and up to 1 million people in Australia existed at the time of the first European contact.

Before the British colonization of Australia began in Sydney in 1788, the way of life and culture of materials differed widely from region to region.

Between 1788 and 1900 the combination of disease, land loss and direct violence decreased the Aboriginal population by 90%.

A wave of massacres and resistance followed the frontier of British settlement. By the 1870s all the fertile areas of Australia had been appropriated, and indigenous communities reduced to impoverished remnants living either on the fringes of Australian communities or on lands considered unsuitable for settlement.

Many indigenous people adapted to European culture, working as stock hands or labourers. With the exception of a few in the remote interior, all surviving indigenous communities gradually became dependent on the settler population for their livelihood.

By the early 20th century the indigenous population had declined to between 50,000 and 90,000. Commonwealth legislation in 1962 specifically gave Aborigines the right to vote in Commonwealth elections.

The 1967 referendum allowed the Commonwealth to make laws with respect to Aboriginal people, and for Aboriginal people to be included when the country does a count to determine electoral representation.

In the 1971 controversial Gove land rights case, Justice Blackburn ruled that Australia had been terra nullius before British settlement, and that no concept of native title existed in Australian law.

In 1972, the Aboriginal Tent Embassy was established on the steps of Parliament House in Canberra.

In 1992, the Australian High Court handed down its decision in the Mabo Case, declaring the previous legal concept of terra nullius to be invalid.

In 2004, the Australian Government abolished The Aboriginal and Torres Strait Islander Commission (ATSIC), which had been Australia’s peak indigenous organisation.

Ethiopia minted its own coins over 1,500 years ago

Ethiopia celebrates New Year in September. Seven to eight years behind rest of the world

The history of Queen Nyabinghi, Shamanic priestess of East Africa

Hatshepsut, Ancient Egyptian brave Queen Warroir who ruled as a Pharaoh in 1478 BC

Bai Bureh, the great African warrior King who led the Temne war against the British in 1898