John William “Bud” Rogan born in 1868 is the 2nd tallest person in the history and tallest African descent at 8 ft 9.

John Rogan was born in Tennessee US, he suffered an abrupt developed spurt when he was just 13 years old and started growing up quickly.

The extraordinary height of John Rogan caused him to live with constant ankylosis, a condition which made the joints stiff caused by inflammation.

This made it impossible for Rogan to place his weight on his feet. At first, crushes used to help him walk around, but later in 1882 Rogan can not even stand or walk.

The interesting part of it is that he was always pulled around in a goat cart invented by himself. 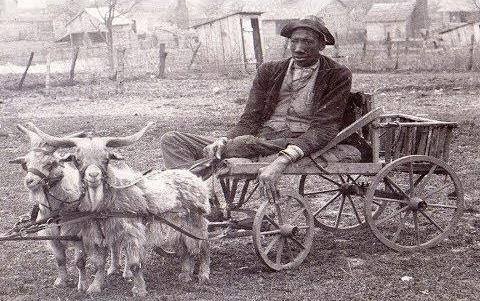 Because of this situation, it was very difficult for Rogan to work, but he sold his own photographs and postcards at the local station.

At the age of 37, Rogan died in 1905 due to complications from his disease, and his body was buried under a layer of concrete to prevent curious scientists from stealing it.

Rogan, the African-American was not officially measured before he died, though he was under 9 feet, his weight was only 175 pounds.