The Shilluk Kingdom was situated in modern South Sudan along the banks of the White Nile river. It inhabited the capital and royal residence in Fashoda. According to their historical folklore and the account of neighboring tribes, the kingdom was founded during the period around the mid-fifteenth century CE by its first ruler, the demigod Nyikang.

The Shilluk were impacted by military threats by the Ottoman Empire and later the British colonial government. The Shilluk King is today a traditional chief within the governments of South Sudan and Sudan. Today, His Majesty Reth Kwongo Dak Padiet who ascended to the throne in 1993 is the monarch of the Shilluk people.

The Reth monarchy was political and religious. The monarch ensured a social order and intertwined his health and the health of his people. Community takes place in ceremonies influenced by the Nyikang national myth. In 1911 Charles Seligman and in 1916 the UK anthropologist James George Frazer researched about the Shilluk monarchy and the values of their people. The Shilluk government was described by Seligman as “sacred kingship”

The kingdom was situated from Lake No to around 12° north latitude along a strip of land along the western and eastern banks of the White Nile and Sobat River. The Shilluk people have strong ties with the traditional ethnic Nuer and Dinka of South Sudan (their neighbors to the south and east, respectively). Their language is connected to Anuak’s language near the Baro and Pibor Rivers.

The Shilluk language’s English name derives from the Shilluk self-designation in the Arabic version: Cøllø or Chollo. This (and many Shilluk’s belief) indicates that the Acholi, another ethnically group living on Ugangan-South Sudanese, Luo in Tanzania, Kenya, DRC, Chad, CAR and Ethiopia (Anuak) borders are of common origin.

Like most South Sudanese Nilotic peoples (such as the Nuer and Dinka), the Shilluk mastered semi-nomadic cattle breeding and some grain farming for subsistence. Their social structure was egalitarian, and there was great symbolic importance for the cattle herds. The lifestyle of the modern Shilluk is similar except that their herds are smaller. As the land along the White Nile is more fertile than elsewhere in the area, they were sedentary.

Except during prolonged droughts, their cultivation of durra, a variety of sorghum (millet), has made them a relatively prosperous agricultural community. The population of today’s Shilluk was estimated at 1.7 million in 2005; it was estimated at around 200,000 during the nineteenth century, residing in hundreds of villages. The kingdom was split into two provinces: in the north, Gher (Gärø) and in the south, Luak (Lwagø). These were divided into regions.

The kingdom was established in 1490, according to Shilluk legends. The hero known as Nyikang, who was believed to be a half-crocodile and had authority over the storm, was its legendary first ruler (‘Reth’). Nyikang was the son of a king, Okwa, who ruled the nation “far south near a large lake”. 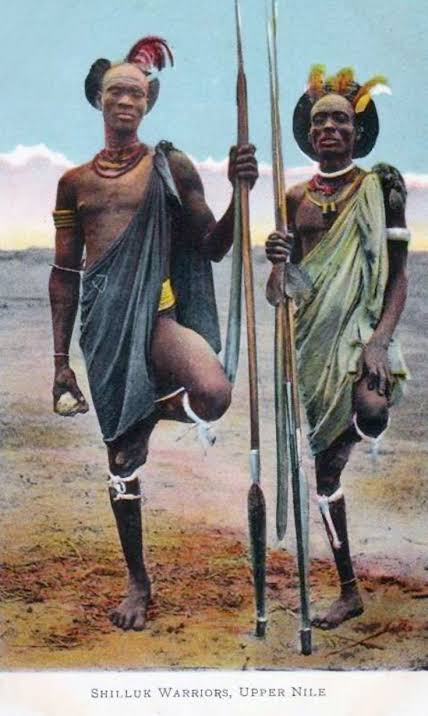 That was believed to be be Lake Albert, where the Acholi live. Nyikang started a war with his brother, Duwadh, the rightful heir to the throne, after Okwa’s death. Nyikang left his motherland with his retinue in the face of defeat and moved northeast to Wau (near the Bahr el Ghazal, “river of gazelles” in Arabic). Here (known as Pothe Thuro by the Shilluk), Nyikang married Dimo’s daughter, a local magician. About 1550 after a dispute with Dimo, Nyikang, migrated north, (he across the Bahr el Ghazal) to Acietagwok (a Shilluk village about 30 kilometers (19 mi) west of Tonga village). Nyikang then traveled west of the present town of Malakal to Nyilual, an uninhabited region. In the end, legends say that Nyikang disappeared in the middle of a battle in a whirlwind.

The Shilluk raided and plundered neighboring communities north and south along the White Nile throughout the 17th century to maintain a surplus of resources. The looting was normally carried out by Podh heads (clusters of villages). The Shilluk king (Reth) was no exception; his Shilluk warriors would be sent upstream to Dinka lands by the Reth of the south. The Reth increased its possessions and its control on the Shilluk region through his armed men, Bath Reth, reserving the largest share of the loot. The timing of these events remains uncertain, and whether the Reth was a single dynasty figure or whether multiple Reth coexisted is unknown. If the latter, a dozen separate dynasties may have existed.

The Shilluk attempted to extend their northern frontier militarily between the reign of King Odak Ochollo (circa 1600–1635) and 1861. The part of the White Nile valley between the villages of Muomo and Asalaya was disadvantageous in agriculture, but game, fish and honey were plentiful in the northern savannah. Odak Ochollo made an alliance with the Sultanate of Darfur to monitor trade on the White Nile, assisting it in its fight against the ethnic Funj of the Sennar Sultanate.

The southern border of the Sultanate of Sennar was occupied by the Dinka in 1630, south and west of the Shilluk country. The advancement of the Dinka, towards the Gezira region, continued through the 17th and 18th centuries. The Shilluk and Funj unified against the Dinka and militarily checked them until this altered the strategic balance. The beginning of Shilluk’s economic relations with other groups marked this period (Funj, Arabs, European merchants and Mahdists).

The Shilluk community began to develop a sense of national unity (despite its diversity) after 1650, followed by a strengthening of royal authority. A monopoly of economic resources and trade was established between the Reth and a more centralized government. This unification is largely attributed to the Shilluk King Dhokoth’s (circa 1670–1690) military success. In Dinka territory, looting proceeded upstream along the White Nile and westward to the Nuba Mountains.

In 1684, the Shilluk crops were damaged by a drought. Many men took up weapons, motivated by hunger, and went down the river to the Arabized peoples of present-day Sudan. From the river, these lootings were orchestrated; men would raid the northern Arab regions in canoes. The White Nile was known as the Bahr al-Scheluk, the “river of Shilluk” during this time. King Tugø (Rädh Tugø) (circa 1690–1710), son of Rädh Dhøköödhø, established Fashoda as the Shilluk kings’ permanent residence and set up elaborate rituals and ceremonies of investiture.

In the 18th century, as the Sultanate of Sennar declined in influence, the Shilluk Kingdom reached its height. The absence of Sennar from the political scene was taken by the Shilluk kings as an opportunity to improve their position on the northern frontier. The caravans were under the control of the kings of the Shilluk, and were enriched by the shuttle service made available by the Shilluk to merchants while traveling between Sennar and El Obeid wishing to cross the White Nile to Asalaya. The Kingdom of Shilluk extended its territories to the region where Khartoum was later founded, and the northern people defeated numerous attempted invasions.

Decline and reconstruction
In 1786, a period of decline started in the Funj Sultanate of Sennar. After 30 years of chaos and looting by Sheikh Nasser Hameg, Sultan Adlan II was disturbed by his war with the Hameg tribe that settled south of the town of Er Roseires.

In 1820, Muhammad Ali, the Viceroy of Egypt, launched his southern campaign to conquer Sudan. That year, Ismail Pasha’s Turkish-Egyptian troops also put a final end to the Funj Sultanate. The Ottomans and Shilluk were eventually confronted.

The northern frontier started to recede, despite opposition from the Shilluk, beginning in 1821. The first documented slave raid on Shilluk land by northerners occurred in 1826. The kingdom was gradually attacked by raiders from then on. A united force of Dinka and Nuer crossed the River Sobat during the reign of Reth Nyokwejø (Yör, Nyokwejø wäd Kwondïd (Nyikwëyø) kwar Okonø wäd Tugø) (circa 1780-1820), which cost the Shilluk complete domination of the White Nile. By 1865, the Kingdom of Shilluk had lost part of its political status.

Do African kings have a role to play in Africa today?

Keagborekuzi I, the Nigerian man who became the world’s youngest monarch at age two