Pharaoh Ramesses II the great was a king of the 19th dynasty (1292-1190 BCE) of ancient Egypt 3000 years ago. In Egyptian history, his reign was the second longest, between 1279-13 BCE. As the greatest, most celebrated, and most dominant pharaoh of the Egyptian Empire, he is also honoured. It is said that he was called the “Great Ancestor” by his successors and later Egyptians.

Ramesses II, who led many military expeditions to the Levant to assert Egyptian influence over Canaan, was a great explorer, king, and warrior. It is also said that he led missions south to Nubia, commemorated in inscriptions at Beit el-Wali and Gerf Hussein temples.

As popular during his period, Ramses II the great had 200 wives and concubines, 96 sons and 60 daughters. But Nefertari, his first wife, was his favorite, and the one that historians say was the real love of his life. Both were 24 years old when they were married and had four children.

From 1292 to 1225 B.C, Queen Nefertari is said to have been a Nubian queen, although some sources claim they don’t know her roots. She is considered to have been highly educated and capable of both reading and writing hieroglyphs, unusual skills she used in diplomatic work for her time, corresponding to other influential royals of the time.

Some historians say that she married for peace, that her marriage to Ramses II started purely as a political step, a power exchange between two leaders that led to a 100-year armistice between Nubia and Egypt. Others believe that the two got married before Ramesses II became a King.

While her motives are unknown, what historians surely know is that Ramses was deeply in love with her. It is known that she also accompanied Ramses on military campaigns, an exercise that during that period was unusual.

In her honor, the Great King even had monuments built as dedications to the Queen. In fact, at Abu Simbel, one of Egypt’s largest and most beautiful structures, Ramesses built a temple for her.

While the pharaohs often presented themselves as larger than their queens’ statues, Ramses did not: he made two colossal statues of the queen and four of Ramses II, all of the same height, were carved on the front of the temple. 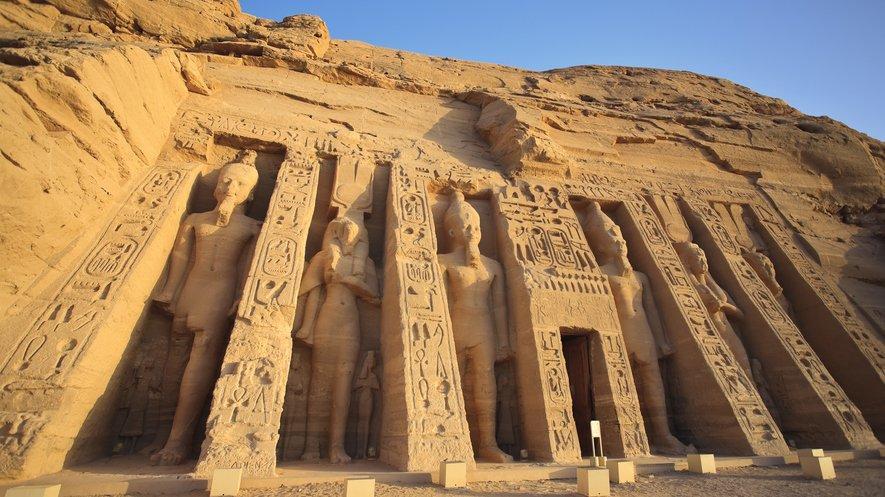 King Ramesses II the great also uniquely called her with the most beautiful names: Great of Praises (wrt-hzwt), Sweet of Love (bnrt-mrwt), Lady of Grace (nbt-im3t), Great King’s Wife (hmt-niswt-wrt), his beloved (hmt-niswt-wrt meryt.f), Lady of The Two Lands (nbt-t3wy), Lady of all Lands (hnwt-t3w-nbw), Wife of the Strong Bull (hmt-k3-nxt), god’s Wife (hmt-ntr), Mistress of Upper and Lower Egypt (hnwt-Shm’w-mhw). Sweetly, ‘The one for whom the sun shines’.

Most of all, the elegant tomb of Nefertari is often referred to as the ‘Sistine Chapel of Ancient Egypt’ and is known as one of the jewels of Egyptian grave monuments. It is one of the most magnificently decorated tombs in Egypt that has ever been found.