In the Middle Ages, the tales about the land of gold in Africa spread throughout Europe. Arab merchants talked about the Wagadu Empire, also known as the Ghana Empire.

One of the main gold producers in Africa was the Wagadu Empire, also known as the Ghana Empire. The king owned all of the gold. Every golden nugget weighing between 25 grams and half a kilogram belonged to the king.

Facts about the Wagadu Empire

The present-day Republic of Ghana got its name from the ancient Ghana Empire. The modern country of Ghana, on the other hand, it is located far from the former empire’s territory.

Modern-day Mauritania, Senegal, and Mali were all parts of the Wagadu Empire.

Between the 4th and 11th centuries, the Wagadu Empire flourished, and its rulers were known as ghana (‘warrior kings’). That is why the Ghana Empire was know to that name by Arab merchants.

The king served his subjects 10,000 meals a day. He used to ride around the city in the mornings, settling conflicts between his people.

Koumbi Saleh, the empire’s capital, consisted of two cities and had a population of 15.000 people. Wagadu people lived in the first city, while Arab and Berber merchants lived in the second city.

Wagadu’s people mastered iron and used it to create strong tools and weapons. Since they could turn fire and earth into iron, blacksmiths were known as “magicians.” The Wagadu army had an advantage over their enemies because they used iron weapons.

Monopoly on the trade with gold and salt 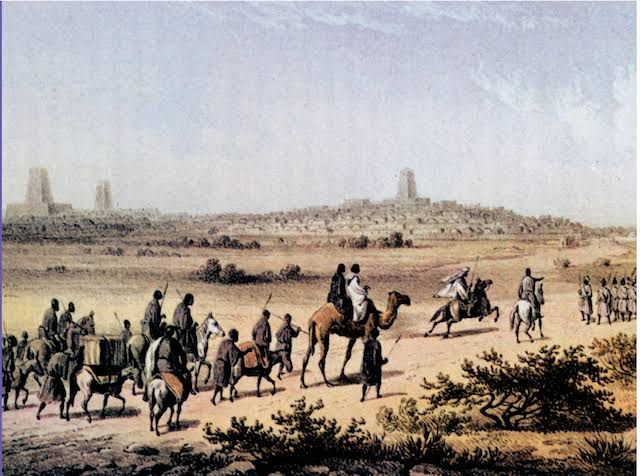 Transportation was supported by the presence of large rivers. The Gambia River, the Senegal River, and the Niger River were the three rivers used.

The kingdom stood at the crossroads of major trading routes. Salt came from the north, and gold and ivory came from the south, owing to Arab and Berber traders.

Salt was worth its weight in gold.

The world’s largest gold reserves were found on the empire’s southern borders. The specific location of the gold mines was kept a closely guarded secret by the state.

The Wagadu kings regulated the amount of gold on the market by storing it. Gold price remained high as a result of such measures.

Silent barter as a method of trading

The Wagadu people used silent barter because of language barriers. Merchants were able to agree on a trading price using this approach.

Traders decided to meet at a certain place to conduct the silent barter. At the spot, one group of traders would give trading goods such as salt or ivory. They would then step away and play drums to signal the arrival of another group.

The other traders would then approach the goods and place a certain amount of gold alongside them. After that, the first group of traders would return. They would take the gold and leave if they decided on the number. If that wasn’t the case, they’d leave and wait for the second party to add more gold.

Both parties were absolutely frank. They didn’t touch any gold or commodities until they had reached an agreement on a price.

The fall of the Wagadu Empire

The fall of this wealthy empire was influenced by a wide range of factors.

Trade routes changed, and new ones emerged further east. In addition, in modern-day Guinea, larger gold mines started to operate. The Wagadu Empire lost its trade and gold control as a result of these reforms.

Overpopulation caused pastures to transform into a desert. There was less food because there was less arable land available. Food shortages were worsened by a series of droughts in the eleventh century.

The Wagadu Empire was replaced by the brief kingdom of Sosso (1180–1235). The prominent Mali Empire ruled the entire region by 1240.

Each area of the world has experienced periods of prosperity and success throughout history. Western Africa was much more established throughout the Middle Ages. Misery, suffering, and inequality did not exist in Western Africa at the height of the Wagadu Empire.

Any empire that grows must also fall, according to history. The fall season brings with it ruins and tales.

Despite the fact that the two states share no territory, the modern nation of Ghana is named after the ancient Empire of Ghana.