Ewuare (also known as Ewuare the Great or Ewuare I) was the Oba (king) of the Benin Empire from 1440 to 1473. Ewuare became king after a violent coup against his brother Uwaifiokun that destroyed large partBenin City.

Following the war, Ewuare rebuilt much of Benin’s city, restructured political systems in the kingdom, widened the kingdom’s territory, and promoted the arts and festivals. He left a significant legacy and he is widely regarded as the first King of the Kingdom of Benin.

Prior to Ewuare, the uzama, a community of hereditary chieftains in the empire, restricted the Oba of Benin’s power and authority. Following the death of an Oba, the uzama were able to nominate the Oba of Benin and restrict the Oba’s efforts.

Oral history in Benin documents Ewuare’s rise to power. The Oba Ohen’s third son, Ewuare, was born. Prince Ogun was the name given to Ewuare at this time.

Following Ohen’s death, Oba Orobiru, Ohen’s second son, exiled both Prince Ogun and his brother Prince Irughe, causing a rift. Oba Egbeka, Ohen’s first son, had ruled after their father died, but he did not reign for long. Ogun then traveled extensively across the country in exile, visiting a variety of kingdoms.

Both Ogun and Uwaifaikon were exiled from the city after Orobiru’s death, according to local historian Jacob U. Egharevba, but Uwaifaikon was able to return, lie to the Uzama, and was named king.

According to legend, while Prince Ogun was exiled, he did a favor for a jungle spirit and was rewarded with a magical bag known as Agbavboko. Agbavboko had the magical qualities that no matter what Ogun put into the bag, it had more space and he could take out whatever he wanted whenever he reached in. He gathered important magical and herbal knowledge from a number of sources during his travels.

He tried hard to sleep under the sacred uloko tree at one point, and the tree advised him to return to Benin City and regain the throne. He removed an infected thorn from a lion’s paw on his way back to the city, and the lion gave him a magical Talisman that he could use to make any situation in the world he wanted.

When he arrived in Benin City, he was shocked to see a parade for his brother Uwaifaikon taking place while the people were starving.

Prince Ogun used the talisman to set fire to vast sections of the capital. He then reached into Agbavboko and took out a poison arrow-tipped bow, which he used to kill Uwaifaikon. In the ensuing chaos, he hid with Edo, a slave who had raised him when he was young and who instantly recognised him in the chaos.

Uwaifaikon supporters broke into Edo’s house and killed him while looking for Ogun, who had gone into hiding. Ogun then left the house, gathered his followers, and asserted his claim to the throne.

In Egharevba’s version, Ogun was taken in by a prominent chief during a visit to the city during his exile, who hid him in a dried well before reporting him to the authorities. Edo, the chief’s head slave, lowered a ladder into the well and urged Ewuare to flee.

After that, Ogun adopted the name Ewuare, which means “the trouble has ended.” The honorific Ogidigan (the Great) was eventually added to his name, and he is now known as Ewuare Ogidigan or Ewuare the Great. His accession to the throne is generally dated to 1440  Ewuare renamed the city Edo (now Benin City to honor the slave who had given his life to save his master,

Ewuare is widely regarded as a key state reformer who was instrumental in many aspects of state formation in the Benin empire. He consolidated the Oba’s power, altered lineage procedures, and established an administrative structure for the Empire. Furthermore, he greatly expanded the empire and took control of a significant territory.

Ewuare’s major administrative development was reducing the power of the uzama chiefs, who were a limiting force on the Oba. Ewuare abolished their ability to appoint the Oba in favor of a clear succession to the first-born son. The uzama’s authority was greatly decreased by the adoption of this primogeniture lineage system.

Furthermore, in order to clarify the situation, Ewuare created the Edaiken title for the oldest son in order to clearly establish the lineage. According to one oral history, this development occurred in the city of Uselu.

Iken, the chief of Uselu, had become an ally of Ewuare. Another city revolted against Ewuare’s rule at one point, and Iken mobilized an army to put an end to the rebellion.

Because he lacked a ruler for Uselu, Ewuare dispatched his eldest son Kuoboyuwa to serve in the town until the war was over. Iken was killed in the fighting, and because he had no heir, Kuoboyuwa took over as ruler. This incident established a clear succession to the king’s oldest son, who was given the title Edaiken as a result of the incident.

Ewuare also established two additional levels of administration in towns and villages, the Eghabho n’ore (town chiefs) and Eghabho n’ogbe (village chiefs) (palace chiefs). These served as administrative arms, directly appointed and accountable to the Oba, collecting tribute, dealing with legal issues, and generally participating in state affairs. To encourage this, Ewuare encouraged the freeborn population to work in the palace for low wages as members of these various orders.

Furthermore, Ewuare was successful in capturing a number of cities and towns in the region in order to expand the empire. He personally led the army against many Edo communities west of the Niger River, as well as key Yoruba settlements such as Akure and Owo.

He quickly replaced the ruling elite in towns he took over with chiefs of his administrative system who were his allies. Oral history recounts Ewuare’s 201 victories over various cities and towns, resulting in a large empire centered in Edo.

During Ewuare, the empire’s capital city was rebuilt with significant redesign. Ewuare constructed significant walls and moats around Benin City (then Edo), large boulevards within the city, and clearly defined zones for different craft work.

Archeological evidence indicates that the walls built around the palace and city, as well as further out into the country, were significant constructions that took many years to complete.

Furthermore, he rebuilt the palace and established a clear separation between it and the rest of the capital city. Ewuare’s introduction of scarification for freeborn citizens to distinguish them from the slave population emphasized the division even further. Egharevba identifies a different source of the scarification that has spread throughout the Kingdom.

Oral histories used by Egharevba suggest that during his reign, his oldest son Kuoboyuwa (the ruler of Iken) and his second son Ezuwarha (the ruler of Iyowa) became rivals and poisoned each other, causing Ewuare to go into deep mourning. In his grief, Ewuare passed a law prohibiting sex in the kingdom for three years, causing many kingdom members to migrate to other areas.

Ewuare overturned the law, but because few migrants returned, he instructed all neighboring states to refuse entry to his citizens and developed scarification to allow clear identification of their citizens.

When the Portuguese explorer Ruy de Sequeira arrived in 1472, Ewuare was the Oba of the Benin empire. It is unknown whether he entered the city, but contacts were established between the Portuguese and the Oba. 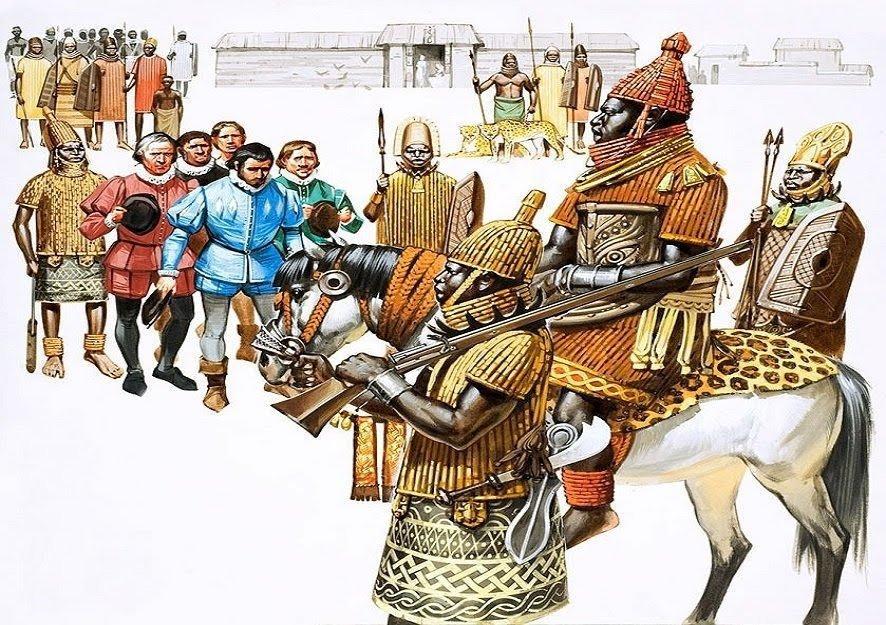 This established limited trade between the two empires, which would be greatly expanded starting in the 1480s. The King of Portugal formed an alliance with Oba Esigie, the first Oba of Benin to interact with Portuguese.

During his reign, Ewuare vastly expanded the arts in Benin and was greatly aided in this through increased trade. Ewuare is widely credited with popularizing ivory and wood carving throughout the empire, as well as the creation of bronze heads for shrines to deceased Obas. Furthermore, Ewuare established many of the royal decoration traditions.

Ewuare is depicted as a person with significant magical powers in both folktales and artistic representations. His herbal and magical knowledge is attested to in a variety of possible works of art from the time. The creation of the Igue festival during Ewuare, which was originally celebrated as a festival to renew his magical powers, is critical in this.

According to one oral history, the Igue festival was originally scheduled to coincide with the marriage of Ewuare and his wife Ewere. He is also credited with founding the Ugie Erha ba festival, which honored the Obas.

Details about his death are uncertain, but Egharevba claims he was buried at Esi, near the town of Edo (Benin City). His first remaining son, Ezoti, was assassinated, and his second son, Olua, ruled for a short time before being deposed when the uzama revolted. Ozolua, his third son, became Oba around 1483 and ruled until 1514. The royal lineage of Ewuare would last for many generations.