A truly one-of-a-kind African country. Ethiopia has a long, detailed, fascinating history, a distinct national identity, incredible and untapped heritages, and rites that are both exciting and mysterious in their own right.

It’s also the world’s oldest living alphabets – Ethiopic – and probably one of the longest with its 345 letters.

The country is a mosaic of plethora of identities and cultures due to its heterogeneous and outlived cultural values and norms, mind-blowing natural attractions, the most dynamic landscapes on the planet, and people’s way of life.

Not only that, but the country is also home to the hottest spot on the planet, The Danakil Depression. The Depression, also known as “The Gateway to Hell” and located in the northeastern corner of Ethiopia, is the hottest place on Earth, with temperatures reaching 125 degrees.

Furthermore, the Erta Ale Volcano’s lava lake is one of only four living lava lakes in the world.

Not only that, but the country is the only African country with its own distinct alphabets, letters, and numbers, earning it a special place in history for having Africa’s oldest alphabets, which are still used today.

According to sources, the Ethiopian alphabet, known as Ethiopic, was developed around 100 BCE. This alphabet is used in several Ethiopian and Eritrean languages. 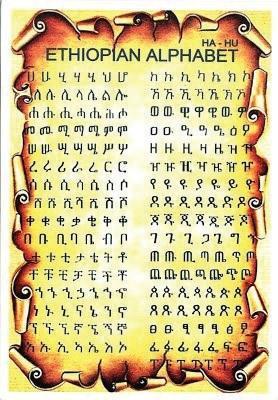 The Ethiopic alphabet is closely related to Sabean language scripts. In Ethiopia and Eritrea, the script is used to write various languages such as Amharic, Tigrigna, Haderigna, Awigna, khemtigna (Waghimra Agew), Guragegna, and others.

According to studies, it is known as the Geez alphabet because Geez was the first written language to use these alphabets before being replaced by Amharic.

The vowels in the alphabet are as follows: a (about), u (spoon), I (meat), a (car), e (say), I (kin), and o. (tore). The Ethiopic alphabet consists of 26 letters, all of which represent consonants and can be converted into syllables by attaching the appropriate vocalic markers to the letters.

Only consonant letters were used in the Geez alphabet. Over time, new letters that combine a consonant and a vowel sound were added. The language employs a set of seven vowels known as. For instance, (be-like Bermingham), (bu-like book), (bi-like bee), (ba-like bank), (bae-like ben), (b’i-like break) (bo-like bob).

Ethiopia is also one of the few countries in the world that still uses its own calendar, and unlike the rest of the world, it has an extra 13th month made up of “leftover days.” Each month in Ethiopia is 30 days long, and in order to have 365 days in a year, there are 5 (6 in a leap year) days at the end of the year known as Pagume.

The Gregorian calendar, on the other hand, has days that can be less or more than 30 in a month. As a result, some differences emerged.

In the Julian Calendar, kings added extra days to the months bearing their names in their honor, such as July and August, which were named after Julius Caesar and Augustus and have 31 days each.

“Visiting Ethiopia is like traveling back in time. “When you first arrive in the country, you can’t help but notice that Ethiopia has a calendar that is seven to eight years behind the rest of the world,” according to a piece produced and posted by Culture trip titled “Why Is the Ethiopian Calendar 7 Years Behind?”

According to the article, the Ethiopian calendar is deeply entwined with biblical anecdotes, from the naming of weekdays to the 12 months of the year. For example, the first day of the week, Ehud, translates as “the first day” in the ancient Ge’ez language, the liturgical language of the Ethiopian church. It is intended to demonstrate that Ehud is the first day on which God began to create the heavens and the earth.

The four-year leap-year cycle of the Ethiopian Calendar is associated with the four evangelists of the Bible. The first year following an Ethiopian leap year is known as the John year, followed by the Matthew year and finally the Mark year. The Luke year is traditionally designated as the year with the sixth Epagomenal day. 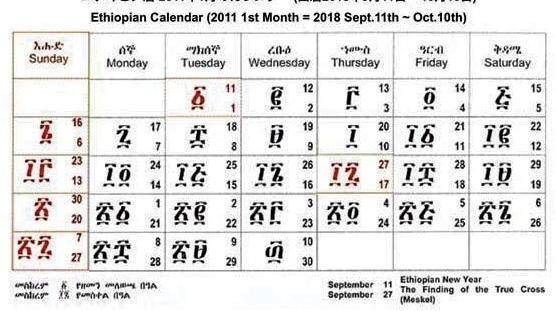 The Ethiopian calendar’s 13th month, Pagume, derives from the Greek word epagomene, which means “days forgotten when a year is calculated.” In a leap year, this month has six days instead of five. A year has 365 days, six hours, two minutes, and twenty-four seconds in the Ethiopian calendar. Every four years, the six hours add up to 24 hours, resulting in the sixth day of a leap year. Once every 600 years, the two minutes and 24 seconds add up to a full day, forming a seventh day known to Ethiopians as rena mealt and rena lelit.

Ethiopia, as one of the few countries in the world with its own calendar system, observes major holidays on days that differ from the rest of the world. Ethiopia, for example, celebrates the New Year on September 11, rather than January 1. The calendar provides foreign visitors with the perfect excuse to hold two separate New Year’s and Christmas celebrations.

Ethiopians continue to use their ancient calendar in modern times. Travelers, on the other hand, are rarely inconvenienced by the calendar difference. The Gregorian calendar is known to the majority of Ethiopians, and some even use both calendars interchangeably.