The Maji Maji Rebellion, was an armed rebellion Africans against German colonial rule in East Africa. The war was triggered by a German policy designed to force the indigenous population to grow cotton for export and lasted from 1905 to 1907, during which 250,000–300,000 died.

The roots of the Maji Maji resistance war lie in the partitioning of Tanganyika to Germany following the Berlin Conference of 1885.

What Were The Causes Of The Maji Maji Resistance War?

The causes of the Maji Maji resistance war can be traced to the nature of the Colonial economy.

The Germans, like most Colonial economies, wanted to establish an economic structure that would generate income that could be repatriated to the mother country. This necessitated the implementation of new taxes and cash crops, particularly cotton, in Tanganyika.

Infrastructural, like as railroads, was also required, and Africans were compelled to work as slaves to finish the infrastructure projects.

Because of the rearrangement of the economy, Africans had to change from their traditional subsistence farming system to forced labor and cash crop growing in order to obtain the income needed to pay the new taxes.

This imposed a financial burden on African households and also threatened to disrupt the social fabric, since unwanted changes in family relations induced by Fathers and Male figures leaving settled regions to supply labor had a detrimental impact on Families and Communities. Cash crop farming also posed a danger to food security since fields that had previously been used for subsistence crops like millet were now being used to cultivate cash crops like cotton.

As a result, women and entire communities were confronted with harsh new alien Economic and Social realities that were so disruptive that the Maji Maji resistance erupted. 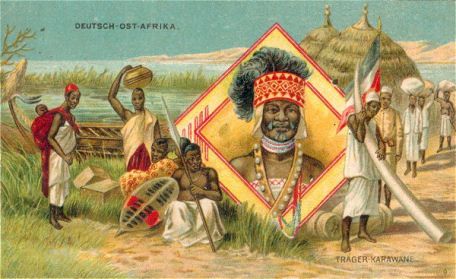 The drought of 1905 was the final straw, and a Prophet named Kinjikitile Ngwale incited the people to revolt by promising them supernatural protection from bullets through the use of a sacred spiritual potion known as ‘Maji Maji,’ or sacred water, which the people believed would turn German bullets into water.

The revolution from 1905 to 1907 drew a large and widespread following, but the German Colonial Army was able to put it down.

To achieve absolute victory and capitulation, the Germans employed a scorched-earth policy, allowing the consequences of the 1907 famine to run rampant and decimating a large number of the resistant tribes who had survived the revolt’s military battles.

Despite the Maji Maji Resistance’s suppression, it revealed that many ethnic Tribes might unite in opposition to Colonial Rule.

This sowed the seeds of a Nationalist Revolt, which culminated in the end of German colonialism and the formation of the Republic of Tanzania.