At the age of 84 (2017), Mrs Esau is one of N|uu last three fluent speakers, one of the San languages of South Africa. 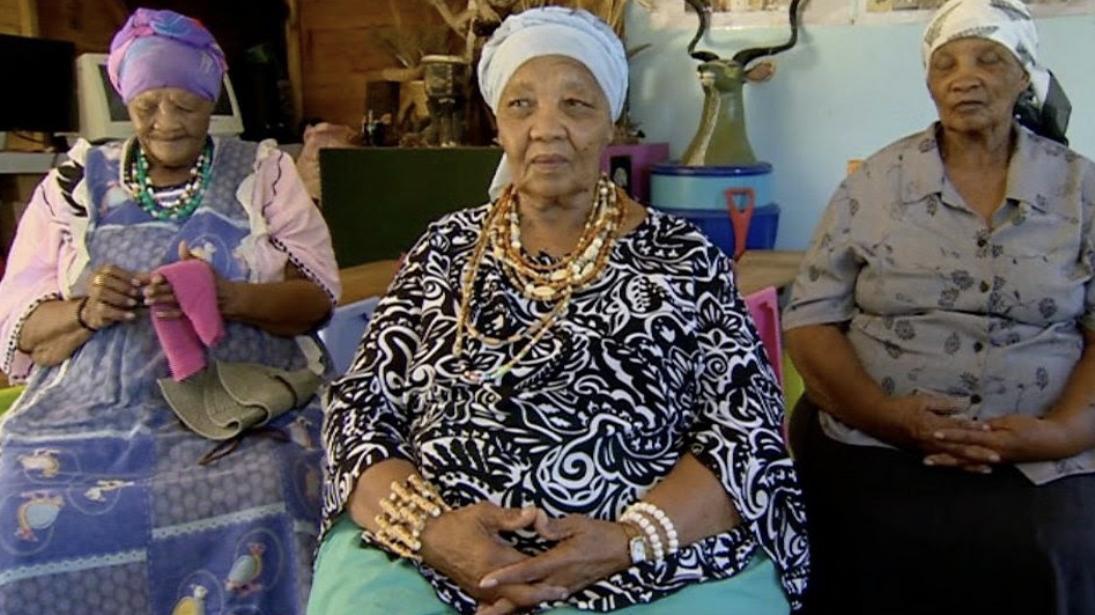 N|uu is considered the original language of Southern Africa before any other language.

With no other fluent speakers in the world apart from this family, the language is recognised by the UN as “critically endangered”.

“When I was a child, I only spoke N|uu and I heard a lot of people speaking the language.

Those were good times, we loved our language but that has changed,” says Ms Esau in Upington, a town in the Northern Cape Province.

The San roamed the region of South Africa for centuries, gathering plants and hunting animals to feed their families.

Today however, the traditional San custom has all but vanished and its descendants tell us that one of the only things left is language that links them with their roots.

Inside a small wooden hut, she taught the 112 sounds including 45 distinct clicks of N|uu with the local children.

“I’m teaching the language because I don’t want it to become extinct when we die,” Ms Esau says.

“I want to pass on as much of it as I can but I am very aware that we don’t have a lot of time.”

Ms Esau has been running the school in her home for about 10 years.

“We would get beaten up by the white man if we were caught speaking our language,” she tells BBC.

“Because of our history, people today do not want to speak the language any more, there is so much pain around it.

“We abandoned the N|uu language and learned to speak Afrikaans, although we are not white people – that has affected our identity,” she adds.

Ms Esau’s two sisters Hanna Koper and Griet Seekoei – both over 90 – are listening intently as she speaks with bitter fondness of their childhood.

They don’t speak much but nod in agreement as she speaks.

Ouma Geelmeid, as she is affectionately known, says she is hoping to remove the shame around speaking N|uu today.

During lessons, with a stick in her hand, Ms Esau points out the N|uu names for body parts on the white board as the students read in chorus.

Like many other African languages, this language had been passed down orally over generations – but this is now threatening its survival.

Until recent years there was no record of it as a written language.

“When you look at the African languages, you learn that they help communicate different perspectives on life, relationships, spirituality, the earth, health, humanity,” says Mr Brezinger.

“There is a wealth of knowledge on survival that has been passed down through the years in indigenous communities that the Western world knows very little about and when these languages die, that unique knowledge is also lost,” he continues.