Betul Taytu c. 1851 to 11 February 1918), reigning from 1889 to 1913, was the Empress of the Ethiopian Empire. She was the third wife of Ethiopia’s Emperor Menelik II and founded Addis Ababa, the capital city of Ethiopia.

Because of her contributions, Ethiopia remained uncolonized country in the world. Italy had already colonized neighboring Eritrea and most of Somalia, but she persuaded the Emperor to declare war when it attempted to colonize Ethiopia in 1896.

The Empress had her men cut off the supply of water to a fortress full of Italians at the Siege of Mek’ele, who surrendered ten days later. A month later, at the Battle of Adwa, she and her husband were each leading their own front-line battalion, and the Italian forces were defeated decisively.

She is also remembered for persuading her husband to move the capital of Ethiopia to its present Addis Ababa site, financing the city’s first hotel. It is said that the battalion of Empress Taytu comprised female warriors, each escorted to protect them from the sun by men carrying red parasols.

Her family is historically said to have a ruling foothold in the country’s northern region. Such areas include: Simien, Gojjam, Yejju, Lasta, Wello and Begemdir. Her aristocratic lineage, descending from Emperor Susneyos’ daughter, dates back to 1607-32.

Her great-grandfather, Ras Gebre of Semen, ruled Semen for 44 years, a time known as Zemene Mesafint, or the “Era of the Princes” His fame was recognized by two steps. He was responsible for making the communities west of Gondar pay taxes in gold and treating his subjects so well, supplying a large amount of food and drink so that they no longer needed to farm to support themselves.

Dejazmach Hayle Maryam, her grandfather, held a valued title as well. He ruled Semen, where Wube, Betul, and Merso, his children, were born. Similarly, her grandmother was Ras Gugsa’s daughter (her other great-grandfather), who was the head of the ruling Wollo family of Were Sheik Yejju. In addition, her uncle Degazmach Wube followed in the footsteps of the family by gaining a high position in the area as well. Degazmach Wube was responsible for ruling Tigray province as the half-brother of Taytu’s father.

Before and after she and Menelik were proclaimed Emperor and Empress in 1889, Taytu is known to have exercised considerable political influence. In court, she led the conservative group that opposed the modernists and progressives who wanted to grow Ethiopia along western lines and introduce modernity to the country. According to historians, prior to making important decisions, she was often consulted by the Emperor.

Thus, Empress Taytu was a central player in the dispute over the Treaty of Wuchale with Italy, which she tore up. The first to agitate the hesitant Emperor and other men to stand up against the Italians was Empress Taytu. She was a key player in the conflict over the Wuchale Treaty with Italy, in which the Italian version made Ethiopia an Italian protectorate, and the Amharic version did not. She was deeply suspicious of European intentions towards Ethiopia.

When talks finally broke down and Italy invaded the Empire from its Eritrean colony, the Empress held a hard line against the Italians, and she marched north with the Emperor and the Imperial Army, commanding a cannon force at the historic Battle of Adwa, which in March 1896 resulted in a humiliating defeat for Italy. Of any African army battling European colonialism, this victory was the most crucial.

Menelik, who by replying to “Yes, tomorrow” (Ishi, neg), often prevaricated and postponed unpleasant decisions, found it useful to have his wife in a powerful enough position to say “Absolutely not” (Imbi) to people and problems that he just did not want to offend or refuse personally.

Taytu began to make decisions on his behalf when Menelik’s health began to decline around 1906, angering her rivals for power through her appointment of favorites and relatives to most positions of power and influence. Menelik chose Sabla Wangel Hailu as the heir-presumptive wife of Lij Iyasu as a means of curbing the political influence of her family in court, because her family had no ties to Taytu’s.

Taytu was widely resented for her alleged xenophobia and nepotism of Gonderine, and the nobility of Shoa and Tigray conspired to remove her from state responsibility along with Lij Iyasu’s Wollo relatives. She was forced from power in 1910, and a regency took over under Ras Tessema Nadew. Taytu faded from the political scene, instructed to limit herself to her stricken husband’s care.

Taytu and Menelik had no children. Menelik died in 1913 and was succeeded by his grandson, Lij Iyasu, the daughter of an earlier liaison. Taytu was exiled to the ancient palace of Entoto, near the church of St. Mary, which she had founded years before where her husband was crowned Emperor.

While some think Taytu may have played a role in the plot that eventually removed Emperor Iyasu V from the throne in 1916, replacing him with Empress Zauditu, a divorce from Taytu’s nephew Ras Gugsa Welle, who became governor of Begemder, was the price for Zauditu’s elevation.

Zauditu, the daughter of Menelik II from another earlier marriage, had always been loyal to Empress Taytu and had invited Taytu to live with her. While Taytu declined she resumed advising rulers “in a modest way,” to quote Chris Prouty. 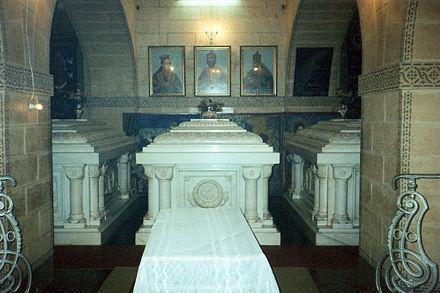 For the next few years, Taytu lived in the old palace next to the church of Entoto Maryam, overlooking Addis Ababa. In November 1917, in order to end her days, she demanded permission to go to Gondar but was refused; she died three months later. She is buried at the Taeka Negest Ba’eta Le Mariam Monastery in Addis Abeba, next to her husband.