Generally speaking, the difference between a man and a woman around the world is their gender, but it’s more than that in Ubang, a rural community in southern Nigeria. Men and women speak different languages in the farming community situated between two mountains in Obudu Local Government Area, Cross River State, Nigeria, and they understand each other perfectly.

Estimated to more than five thousand, the inhabitants believe that God gave them the words that make up the two languages, and no language is superior to the other.

“There is a stage the male will reach and he discovers he is not using his rightful language. Nobody will tell him he should change to the male language,” Chief Oliver Ibang told BBC in 2018.

When the boy starts speaking the men language, you know the maturity is coming into him.

Chief Ibang said that if a child does not adjust to the correct language by a certain age, they are considered “abnormal” in Ubang, which is made up of three villages-Okwersing, Ofambe and Okiro.

But what brought about the language uniqueness that they are so proud of?

Chief Ibang explained: “Adam and Eve were created by God and they were from Ubang.”

“That’s why Ubang has the advantage of two languages – we are different from other people in the world.” he explained.

Odobi told the Niger Delta Voice that God descended on one of the mountains of the village of Okiro and stood on the rock to distribute languages at the top of the mountain.

“He started with us (Ubang) since it is our mountain that He stood to distribute the languages and His footprint is still etched on that rock till today,” Odobi said.

Examples of words in male and female Ubang 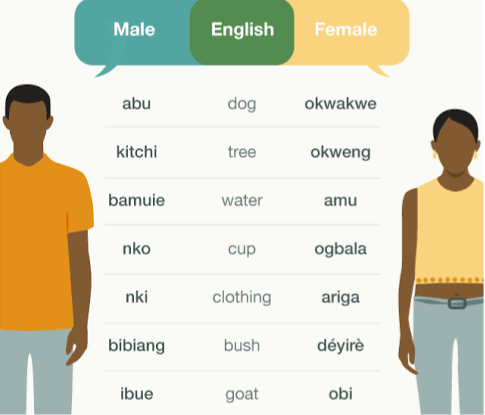 From an anthropological perspective, anthropologist Chi Chi Undie, who researched the community, clarified their language distinction. “This is a dual-sex culture,” she told BBC.

“Men and women operate in almost two separate spheres. It’s like they’re in separate worlds, but sometimes those worlds come together and you see that pattern in the language as well.”

“Because in Nigeria there are lots of dual-sex systems and yet we don’t have this kind of language culture.”

The Ubang community, which is mostly Christian with an interest in cocoa farming, has no plans to combine the two languages until God comes down to direct otherwise, the elders say.

These elders are also confident that, despite the increase in the use of English among the young people of the community who are supposed to pass their mother tongues down to their children, languages will continue.

Students are required to speak English in schools in Ubang instead of their native languages. The fear is that, as with other indigenous African languages on the verge of extinction, the Ubang languages could die.

A gradual decrease in the use of indigenous African languages has been seen in recent studies, and there are concerns that most African countries will soon speak English as a first language, and perhaps as a single language, leading to a loss of culture and identity.

Human rights experts have urged countries to “recognize, protect and promote indigenous languages in full cooperation with indigenous peoples through laws, policies and other strategies.”