“High Chair” is the chair of a nation, traditionally positioned on a dais and surmounted by a canopy, illustrating the authority of the ruler who sits on it and often confers the power on it.

Thrones are most often used as the symbols of authority of kings and leaders. The more lavish the royal throne is, the greater the presence of the king. In ancient African cultures, gold was the most commonly used thing to create and beautify the thrones of the king.

The very first tale is attributed towards the most iconic Egyptian king.

Golden Throne of Tutankhamun of Egypt. The following items were used to make this throne: gold leaf, precious stones, carved wood, colored glass and the golden throne enamel Year of construction was approximately 1325 BC. This is shown in: Egyptian National Museum, Cairo, Egypt

During archaeological digs of the tomb of king Tutanhamun, the Golden Throne was found by British archeologist Howard Carter in 1922. 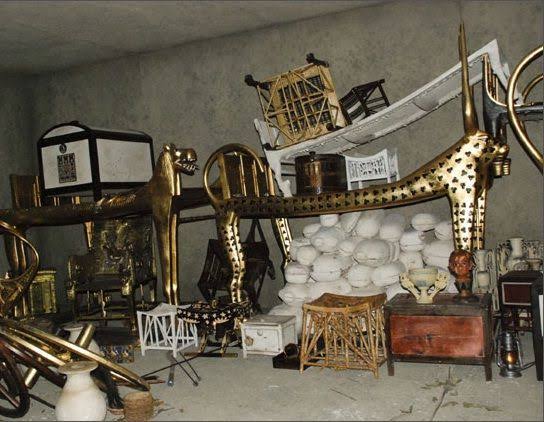 The ancient king of Egypt, Tutankhamun ruled from 1330 to 1323 BC. King Tut’s pyramid was the only tomb in the Egyptian Valley of the Kings that had not been looted or stolen.

The Royal Throne of Tutankhamun is just a rare piece of art. King Tut’s luxury armchair is characterized by the structural complexity and the richness of details. The colours, which are an example of the high level of expertise of ancient Egyptian artisans, have not changed for 3000 years.

Coloured glass & precious stones have been used to paint the details of the art piece. The chair is filled with multicolored quartz plates, reminiscent of the Byzantine mosaic. Against the viewpoint of the bright gold with which the throne is filled, the finishing colors look notably chic.

An example from King Tut’s every day life is seen at the front of the throne: the young pharaoh used to sit in a comfortable posture, his wife, Ankhesenamun rubbed his shoulders with fragrant oils.

You will see a gold bracelet on the left foot of Tutankhamun if you take a closer look. On the right leg, his wife has the same jewels. These bracelets have been considered in ancient Egypt a sign of marriage.

Behind the throne there are 4 cobras with solar discs placed on their heads. The royal snakes seen in blue and navy blue enamel were the symbol of wisdom in the ancient Egypt. The chair’s side reverses have depictions of winged snakes made from turquoise enamel with crowns on the heads. Also you can see the chairs’ legs are crafted in lion’s paws and designed with lion’s heads that represent superior and might.

As thousands of tourists go to Egypt every year to see not only mysterious pyramids but also have high chance to enter National Museum in Cairo. The Golden Throne of King Tutanhamun is found in one of his halls.

Egypt is a home to biggest pyramids of ancient Pharaohs.