Sobhuza II, also known as Nkhotfotjeni, was born in Mona on 22 July 1899 and died on 21 August 1982. He was Paramount Chief and later Ngwenyama of Swaziland for 82 years and 254 days, the longest verifiable reign of any monarch recorded world history.

He ascended to the throne as King of Swaziland on December 10, 1899, when he was only four months old. After the death of his father, Ngwane V. At that time Ingwenyama Sobhuza was  in Zombodze.

He was educated at the Swazi National School, Zombodze, and at the Lovedale Institution in the Eastern Cape, South Africa, before assuming the Swazi throne at the age of twenty-two as the chief. His grandmother, Labotsibeni Mdluli, served as regent throughout his youth, formally transferring power to Ngwenyama on 22 December 1921.

Sobhuza’s direct reign would have lasted more than 60 years (1921–82), during which he presided over Swaziland’s independence from the United Kingdom in 1968, after which the British government recognized him as King of Swaziland (Eswatini).

Early in his reign, Sobhuza sought to address the issue of land partitioning and deprivation set up by the British colonialists in 1907. He was the first to lead a delegation to London to meet King George V and ask him to restore the land to the Swazi people.

In 1929, he again brought his case on the issue of land to the Judicial Committee of the Privy Council. He lose the case due to the terms of the Foreign Jurisdictions Act, which effectively placed the actions of the British administrations in protectorates beyond the jurisdiction of the British courts.

Sobhuza’s role during this colonial period was largely ceremonial, but he still had a major influence as the traditional head of the Swazi nation.

He attended the coronation of Queen Elizabeth II in London in 1953.

In the early 1960s, Sobhuza played a major role in events leading to independence for his country in 1968. He opposed the Westminster post-colonial constitution proposed by the British Government, in which he was assigned the role of constitutional monarch.

As a result, through his advisory council, he formed the Imbokodvo National Movement, a political party that contested and won all seats in the pre-independence elections of 1967. He was recognized as King of Swaziland by the British in 1967, when Swaziland was given direct rule. Independence was achieved on September 6, 1968.

Following this, Sobhuza skilfully blended the appeal to tribal customs with the capacity to manage economic and social change in his kingdom.

On 12 April 1973, the King overturned the constitution and dissolved the parliament, and henceforth exercised power as absolute ruler.

A new constitution was promulgated in 1978, which provided for an elaborate reversion to tribal rule, involving an electoral college of eighty members chosen by forty local councils known as tinkhundla, dominated by tribal elements.

The Swazi economy thrived under Sobhuza’s leadership. Swaziland is rich in natural resources, and much of the land and mineral wealth originally owned by non-Swazi interests was brought under indigenous control during the reign of Sobhuza.

In 1981, Sobhuza celebrated his Diamond Jubilee. At that time, he had successfully restored and, indeed, strengthened the role of the monarch as chief arbiter of decision-making in his kingdom. In the early 1980s, King Sobhuza attempted to gain control of KaNgwane, a Bantustan established by the South African government in an attempt to reunite all the Swazi people separated by the colonial boundary. He died at the age of 83 on 21 August 1982 at Embo State House.

Sobhuza’s official duties of 82 years and 254 days are the longest precisely dated monarchical rule in history and the longest documented reign of any ruler in the world since antiquity. Only Pepi II Neferkare of Ancient Egypt and Taejo of Ancient Korean Kingdom of Goguryeo are claimed to have reigned longer, although these claims are disputed.

Known by the honorary “Bull of Swazi” as a result of his numerous offspring, King Sobhuza continued the tribal practice of maintaining many consorts. According to the Swaziland National Trust Commission, King Sobhuza II had 70 wives, giving him 210 children between 1920 and 1970. Approximately 180 children survived childhood, and 97 sons and daughters were reported to have lived since 2000. He had more than 1,000 grandchildren at his death. 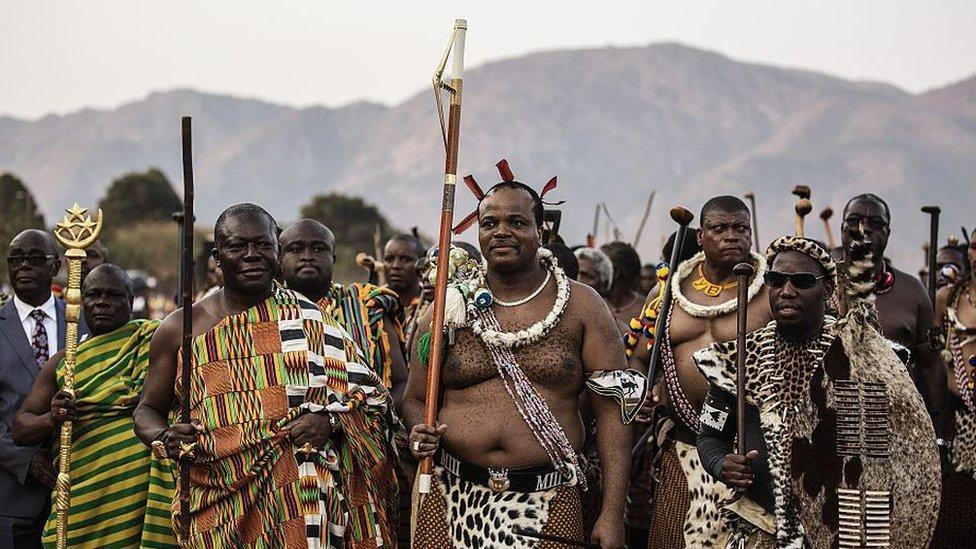 Known as the honorary “Bull of Swazi” as a result of his numerous offspring, King Sobhuza continued the tribal practice of maintaining many consorts. According to the Swaziland National Trust Commission, King Sobhuza II had 70 wives and had 210 children between 1920 and 1970. Approximately 180 children have survived childhood and 97 sons and daughters have been reported to have been living since 2000. At his death he had more than 1,000 grandchildren.