Some people do not know that there were ancient African games that had tremendous popularity and respect even before the arrival of sports like football, basketball, volleyball, netball and others to Africa, but regrettably these sports were dropped and slowly forgotten.

The interest could be revived for any of these sports so who knows might still be featured in the Olympics.

In Africa, if someone talk about high jump game the country which will come to one’s mind is Kenya for its international recognition in athletes in the world.

One would also talk of Uganda, Ethiopia and Eritrea. Obviously Rwanda may not appear in one’s listing of sports, but before colonialism era Rwandans were excellent in high jump. 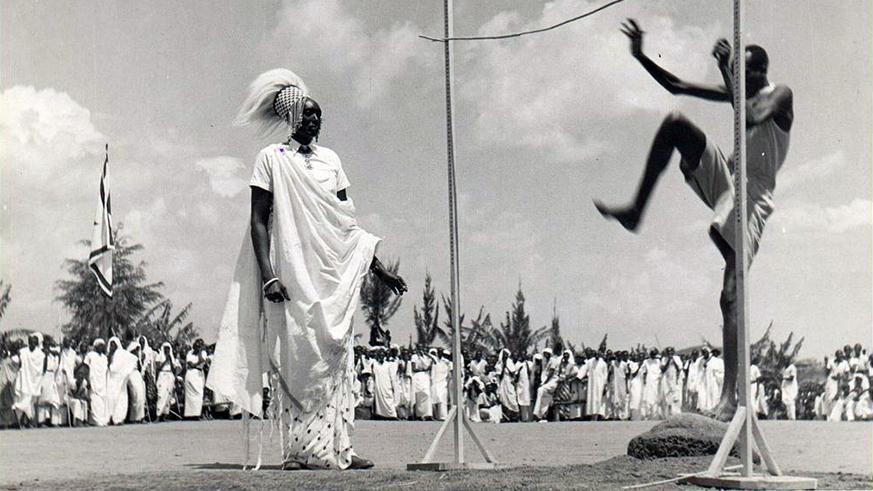 Emmanuel Bugingo wrote in his thesis, ‘Gusimbuka Urukiramende,’ that Professor Joskl indicated that “long before the rise of the current sports revolutions Rwandans were considered to be outstanding high jumpers.”

‘Gusimbuka Urukiramende’ relates to a halfway line on two vertical lines. The variety of the tools used and the type of venues at which it happened makes it completely unique from either high jump sport model. Also, the fact that there were clearly various styles of jumping.

“Before the colonial period, sport was enacted. The sport, which was performance by Rwandans in comparison to the Western way of high jumping, has pleased the colonialists, “said Bugingo.

During the course of his training, the poem, panegyrics, dance, self-defence, throwing spear, running, high jumping, Jean-Damascène Rwasamirera, aged 76, reveals also that he was given enough time in this preparation for Intore. Their training involves poem. “It was a popular sport just like football, but it took a longer time, because of the selection process and it was competitive as people competed at individual level,” he says.

He also adds that it was a custom of paramount value in the Rwandan culture when people saw their exceptional physical talents jumping over 2.00 meters or more than 6 feet. The more you learned, the bolder you became.

The king could order a variety of art exhibitions to be held on the courts at social occasions and high jumping was one of the activities performed. It was also held during bridal showers and outside the courtyard at important local gatherings.

‘Gusimbuka’ was a focused game on the courts, however, apart from a manly training and a courteous amusement for the King and other members, high jump was performed in the community as part of a social gathering as defined by the Europeans.

In instances cases, the dancers also performed in high jump games. Rubakambu, the dance master among the best participants of Rwandans “high jumping” as well Butera, who was the king’s leading dancer in 1930s, was also regarded best high jumper.

Identifying popular athletes wasn’t simple, as it was not standardized at the time. Furthermore, the most notable high jumpers documented during the time in power of King Musinga from 1897 to 1931 have been shown to be Kanyamuhungu, while during the time of King Rudahigwa (1931-1959) the most popular jumpers noted were Ngoga, Gashimirang, Kanyemera, & Mwunvaneza.

Rwasamirera explained that while adults and members of the Intore were champions of the game, they began at an early age and were a relaxed sport for children.

The game was played by both young and adult people though the children played it at first by planting two poles horizontally at the heights according to their age.

The children who have done most of their housework utilized their breaks to play their games until evening, when they brought livestock home. The tallest boys were tested to spring upwards in a line. Gateyihene became the most famous Rwandan in the high jumping game.