The Old Towns of Djenné are an urban and archaeological complex in the Mali city of Djenné. The four archaeological sites featured in it are Djenné-Djeno, Hambarkétolo, Kaniana, and Tonomba. It was added to the World Heritage List by UNESCO in 1988.

Djenné, which has been inhabited since 250 B.C., developed into a market hub and a crucial connection in the trans-Saharan gold trade.

It was one of the centers for the spread of Islam in the 15th and 16th centuries. Nearly 2,000 of its original homes have persisted, and they are situated on hillocks (toguere) to protect them from the recurring floods.

The histories of Djenné and Timbuktu are interconnected. A significant portion of the trans-Saharan commerce in commodities like salt, gold, and slaves that came into and left Timbuktu between the 15th and 17th centuries flowed through Djenné. Both cities developed into centers for Islamic learning.

For administrative purposes, the town is a part of the 302 square kilometer Djenné commune, which also includes the following ten nearby villages: Ballé, Diabolo, Gomnikouboye, Kamaraga, Kéra, Niala, Soala, Syn, Velingara, and Yenleda.

The population estimates include these villages and are for the commune. The communities of Ouro Ali, Derary, Dandougou Fakala, and Madiama form the commune’s northern and southern borders, respectively. The commune’s western boundary is formed by the community of Pondori. The town serves as the Djenné Cercle’s chief-lieu, one of the Mopti Region’s eight administrative subdivisions.

For its architecture in the Sudanese style, Djenné is renowned. The Great Mosque is one of the town’s many structures composed of sun-baked clay bricks that have been plastered. 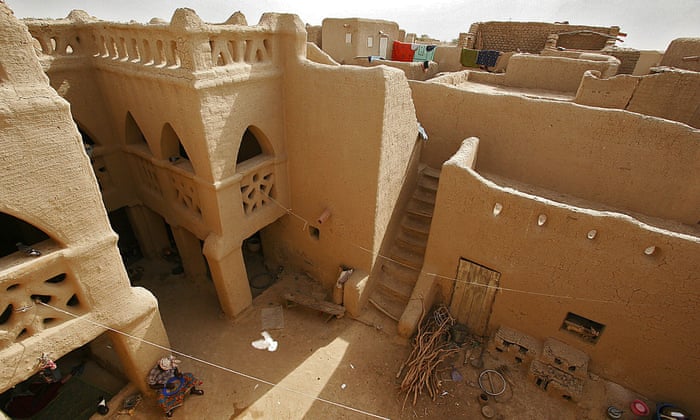 Traditional flat-roofed two-story homes have towering façades with pilaster-like buttresses and an intricate arrangement of pinnacles forming the parapet above the entrance door. They are constructed around a tiny central courtyard.

Bundles of rônier palm (Borassus aethiopum) sticks, known as toron, that extend about 60 cm from the wall are used to embellish the façades. The toron can be used as a ready-made scaffold as well. Ceramic pipes that extend over the rooftop prevent wall damage from rainwater from the roof.

The languages spoken in Djenné also show the diversity of the region, with the majority of the population speaking a Songhay variant known as Djenné Chiini. The nearby villages all speak one of Bozo, Fulfulde, or Bambara.