Bantu knots are a protective hairstyle in which the hair is repeatedly sectioned, twisted, and wrapped around the base to make a knot-like appearance stacked on top of one another.

Bantu knots can be traced back to the Bantu speaking people, which started in Southern West Africa and moved out through Central, Eastern, and Southern Africa during the Bantu migration, from the 2nd millennium BCE to 1500 CE.

Today Bantu people can be found in several parts of Africa, including the Central, Eastern, and Southern regions, where they speak 500+ distinct dialects of the same language.

In Jamaica, Bantu knots are also known as Chiny bumps.

Greater Ethiopia was the name given to the area that connected Africa with India. It’s known as the ancient Ethiopian belt by certain researchers. Most of these people have merged, exterminated or forced south by new populations coming from the north.

The original Buddha was wearing the hairstyle\sknown today as Bantu knots. Asia’s ancient people were black. Many Greek and Roman documents exist concerning these Ethiopians (Black people) who lived from Africa to India. Buddha was not, according to popular belief, a fat White Asian man. 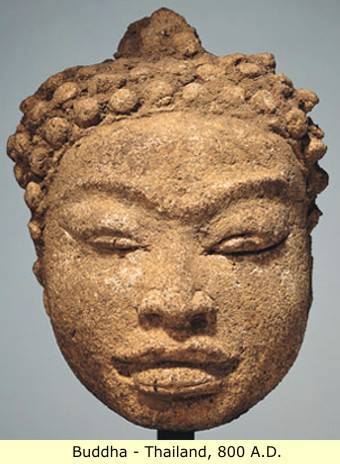 Siddhartha Gautama (“the Buddha”), who lived more than 2,500 years ago, is commonly regarded as the founder of Buddhism in India.

Gautama, a prince born into a wealthy family in present-day Nepal, lived in the 5th century B.C. Historians argue about whether he was a prince or simply the son of an oligarch.

Gautama, whether a prince or not, gave up his life of luxury to seek enlightenment after witnessing the sufferings that regular people faced.

Gautama is reported to have gained enlightenment while meditating under a Bodhi tree after six years of quest. He would spend the rest of his life attempting to teach others how to achieve this spiritual state.

Buddhism, along with Christianity and Islam, is currently regarded as a major religion with 470 million adherents. Despite its origins in East and Southeast Asia, the impact of faith or ‘style of life’ is spreading to Western countries.

We’re still wearing Bantu Knots after all these years! It’s actually incredible to see how we’ve managed to hold on to our history over the years, especially when so much of it has been stolen away from many of us. Bantu Knots are a terrific way to defend yourself.