Because of the harsh weather in some parts of Africa, people had to use ointments and other cosmetics to look good and protect themselves. From the Egyptians in the north to the Himba people in Namibia in the east. Ancient Egyptians didn’t have a choice about whether or not to wear makeup. For Egyptians living in the 21st century, makeup is a choice. It was almost a part of Egyptian life that couldn’t be avoided.

Around 3000 BC, Egypt was without a doubt one of the most advanced societies in the world. It was different from other civilizations because of its rich history and cultural practices. One of these cultural practices was that both men and women used body art like makeup.

Egyptian men put on makeup and other things to make themselves look better, which is more common for women today. The gods weren’t left out, though, because their statues were also made up in the same way. People often say that cosmetics in Egypt have been around as long as vanity has.

People think that the Egyptians held the ancient secrets to beauty and youth because they cared so much about their appearance. People believed that the more elaborate their jewelry was, the higher up in society they were. They also thought that it kept evil spirits away.

POWER OF THE EYE One of the oldest Egyptian fashion trends, which dates back to 4000 BC, was to decorate the eyes. The colors green and black were used the most. Putting these things on the eyes made them look like almonds. People think that the “cat eye,” as it is commonly called, came from Egypt.

Drawing a line around the eyes is seen as a protective charm that can be lost or changed by someone else. A naked eye was vulnerable to the “evil eye” because it wasn’t protected.

Ancient Egyptians started using eyelash curlers around 3400 BC, which is also where the history of mascara begins. For this, they used a mixture of soot, oil, and egg white. Another popular mixture was made by mixing crocodile poop with water and honey. 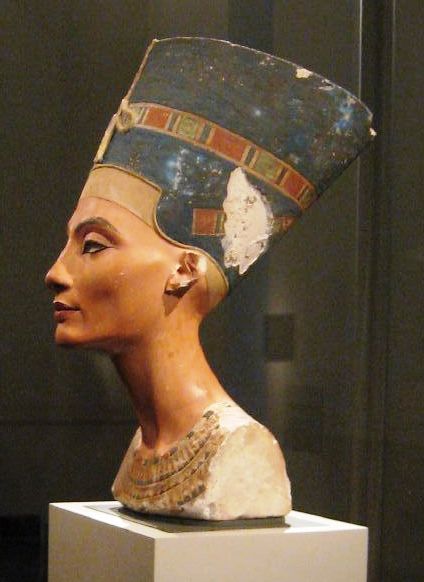 Sindya N. Bhanoo wrote in the New York Times, “The elaborate eye makeup that Queen Nefertiti and other ancient Egyptians wore was thought to have healing powers, calling on the protection of the Gods Horus and Ra and keeping illnesses away.” Science doesn’t let you do magic, but it does let you make cosmetics that can heal.

The Egyptians used lead-based makeup, which was antibacterial and kept flies away. In the same way, people thought that using henna put them under the protection of Laskhmi, an Egyptian goddess who was known for being beautiful, kind, and lucky.

Science doesn’t allow magic, but it does let us make cosmetics that heal.

HOW IT WAS MADE AND WHAT SCIENCE WAS USED

Like most other ancient societies, the early Egyptians had to make do with things they found in nature. As a result, they used things from nature to make beauty products. Most of the time, people wore white makeup, black makeup made from carbon, lead sulphide (galena), or manganese oxide (pyrolusite), and green makeup made from malachite and other copper-based minerals.

Red ochre was ground up and mixed with water, then painted on with a brush to the lips and cheeks. Henna was used to color nails yellow and orange.

Egypt had two kinds of eye makeup based on what was in them.

Malachite, a green copper ore from Sinai, is used to make UDJU. Sinai was thought to be ruled by Hathor, an ancient goddess who stood for beauty, love, happiness, and women. People often called her the “lady of malachite.”

STIBNITE or GALENA was used to make MESDEMET, a grey ore of lead (lead sulphide). It was found near the coast of the Red Sea. It was one of the things that Asiatic nomads gave to the pharaoh Hathshepsuf as a gift after he went on an expedition. 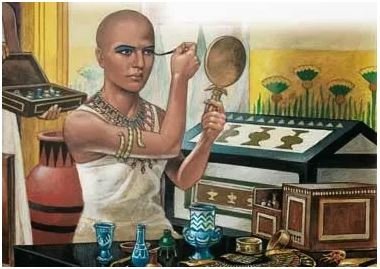 Containers for cosmetics have been shown in art since the first dynasty, and they are one of the earliest things that archaeologists have found. At Saqqara, pieces of a salve chest were found that had thirty places for potions and oil jars. At first, the jars were made of granite and basalt. Later, they were made of alabaster and had a sharp lip.

Prof. Hamed Abdel-reheem Ead, a chemistry professor at the University of Cairo, says that cosmetics were so important to the Egyptians that they were put in the tomb before it was sealed after the person died. He went on to say that three women from the court of Tuthmosis III were buried around 1400 BC with expensive royal funeral equipment, including cosmetics. Two of the jars held a cleaning cream made of lime and oil. “He who must stand before the gods to judge must first be pure,” this saying goes.

For them, being pure meant always looking good.

He also said that even though their hair was healthy, both men and women in ancient Egypt wore wigs on special occasions. They used lotions to make the wigs look even better.

Even though styles have changed and men in Egypt rarely wear makeup and wigs these days, it is thought that cosmetics were first used in ancient Egypt. Queen Cleopatra is often given credit for making many of the cosmetics we use today.