Kevin Hart may have found himself in the crosshairs of cancel culture again.

The comedy box office star is currently globetrotting on his “Reality Check” comedy tour. On Dec. 9, he announced that he will be bringing the show to Cairo, Egypt. The performance is scheduled to take place at the Cairo Indoor Stadium on Feb. 21. It will mark the comedian’s first time doing standup in the ancient city known as the home of the pyramids of Giza.

While Hart is finishing up the North American leg of the junket, he is already being slammed by Arab fans in Egypt (an African country) for an alleged joke.

According to the Middle East Eye, the entertainment mogul is accused of saying that ancient Egyptians were Black. As a result, many have called for his upcoming show in Cairo to be canceled and have expressed disdain for the actor through hashtags such as #kevin_hart_is_not_welcome_in_egypt and #CancelKevinHartShow.

Debates about Egyptians not having the Eurocentric roots has been an ongoing debate. Dr. Cheikh Anta Diop, a Senegalese scholar, refuted efforts to continue whitewashing Egypt’s melanated history in the 1980s by pointing out that mummified remains proved their hair, features, the amount of melanin found in skin samples, and other factors all prove that they were genetically Black. 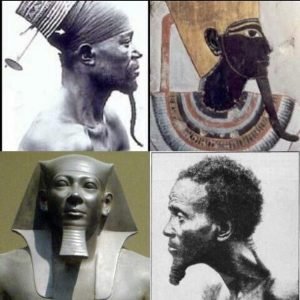 Reactions to Hart’s alleged comparison and Egypt’s debated genealogy have been split.

#kevinhart_is_not_welcome_to_Egypt
You are not welcome in Egypt. Egyptians are not Africans. We are the true builders of civilization, nobody else. The Afrocentric is just a lie. You are a liar. Egypt is our country, not the Africans.

Egypt do not want Kevin Hart performance in the country. Because he speak the truth that Egypt is black Africa long before the Arabs and the European invasion. pic.twitter.com/Y0wq55LjnQ

Neither Hart, 43, nor his team have publicly addressed the matter at the time of this report. This isn’t the comedian’s first attempt to address fans who don’t find humor in his jokes.

Many people will remember he missed the chance to host the 2019 Oscars when an old tweet in which he joked about how he would react if his son Hendrix identified as gay struck a chord with the LGBTQ+ community community met.

Hart was criticized again in 2020 when he joked that his daughter Heaven had “hoe-like activities” because of her fleeting teenage crushes. In an Instagram post, Hart addressed the “Zero F**ks Given” joke backlash and cleared up any misconceptions that he didn’t respect his daughter.

“We have to stop. Stop the false narrative, it’s a false narrative being created…I’m not calling my daughter a hoe, I’m saying what she did is a hoe-like activity,” said the father-of-four.

In July 2021, Hart told The Sunday Times that he had been extremely unfazed by the public’s previous efforts to have him canceled for his controversial comedy plays. Hart said: “If someone has done something really harmful, then there should definitely be a consequence. But if you’re just talking about… nonsense? When you talk, someone said! They must be taken [down]!’ Keep your mouth shut! What are you talking about?”

Last month, while appearing on The Very Well Mind podcast, the Fatherhood star said society’s sensibilities limited his joke-telling. “Now there is an increased level of sensitivity. There’s a higher level of opinion today because social media has given the world a range of platforms for people to express themselves and their feelings,” he told host Amy Morin, who is a licensed therapist.

“So now you’re going to hear the things we haven’t heard on a regular basis. The conversations you may not have heard, you hear them because they’re all happening in real time. With that said, we can’t lose the idea of laughing at ourselves,” Hart added