History wiped out. The Dinka Nubians connection from Central Sudanic are the first ancient Egyptians

From the Book ‘Sudan’s Blood Memory’ The Legacy of War, Ethnicity, and Slavery in South Sudan by Stephanie Beswick. Stephanie Beswick is a professor of history at Ball State University in Muncie, Indiana. She was born in Khartoum, Sudan.

The Dinka Nubian Connection
Many societies worldwide possess oral histories and long memories, reaching back many centuries, particularly of wars and events of great trauma. Labeling them “blood memories” in this book, Stephanie Beswick presents a pre-colonial history of Southern Sudan.

Beginning in the fourteenth century, the book follows the region’s largest ethnic group today, the Dinka, from their original homelands in the central Sudanese Gezira between the Blue and White Niles, into their more recently adopted homelands in Southern Sudan. Beswick demonstrates how early pre-colonial stresses play a critical role in modern-day South Sudan, in what has since become the world’s longest civil war, fought externally against the fundamentalist Islamic Northern Sudanese government as well as internally within the South itself.

The first part of this book details how the Dinka and other Nilotic tribes came from central Sudan about 500 years ago. There is a 25 -27% linguistic relationship between the Dinka language which is Nilo-Saharan and the Ancient Nubian language. The modern so-called “Nubians” are aslo physically related to the “Nubians” of the north.

Moreover, the Dinka are jet Black and look like the Nubians depicted in Egyptian drawings.

What does the DNA Analysis tell us?
From: Y Chromosome Variation Among the Sudanese 2008,

The Nilotic groups possess the most ancient lineages of
A M13, B M60 and also E M78. While the Beja and Copts
and other Afroasiatic Speakers have many lineages
including J1 and R1b! Small amounts of A and B
Y chromosomes exist with Afroasiatic
speaking Sudanese groups.

The people who are the so-called “Nubians”
carry 8 different Y chromosome lineages
including I, J1. J2 and R1b!

The Ancient Nubians in AE paintings are usually
jet Black in color with Negroid features.
The modern “Nubians” are mixed.

A and B are the oldest lineages for living men
period. The earliest inhabitants of the Nile
were the ancestors of the Nilotics.
The earliest Egyptians were Nilotic.
The Ancient Egyptians called themselves
Kememu because they were jet Black in color.
The gods of Kemet were deified individuals
who actual lived in the remote past.
Ausar was a jet Black Nilotic man.

The original old Kingdom pharaohs were
very Black with Negroid features.
I’ve seen it in books that I
could not scan at the time.

The people of the Oryx,
the followers of Set were
reddish brown like the modern
Somalians and Beja. They made war against
the original jet Black Egyptians
who followed Ausar. That’s what
the Ausar/Set story was probably really
about. The war is between men over the
patrilineages even today. The women
were spared. The women were native
Africans as well. Auset, Neith and
Hetheru lived on. 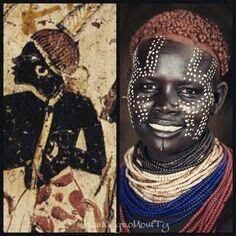 Consequently, the followers of Set won.
The People of the Black Rock – the
Nilotic MEN are being hunted and killed
even as I write in South Sudan and Darfur.
The women are captured for the other side.
Even New Kingdom TaSeti pharaohs had
jet Black wives. Nothing has changed.

Not only have paintings and statues been
altered, but the true physical legacy
of the first Kememu is being wiped out
without a true understanding of how
they fit into the AE framework.

On October 31, 2007 Djehuti said in arguing with Maahes in Topic: Motion Picture: Goddess of the Sun :

“…..You make the claim that the label ‘black’ as
applied to people is not indigenous to Africa but was
something created by Europeans. We not only have evidence of indigenous Africans using black as a name for themselves but even the Egyptians themselves since the true name they called themselves was Kememu!” and

“….Again, you associate ‘black’ with only the
darkest Africans like Nilotic peoples such as the
Dinkas or Nuers. ‘Black’ in reference to people does not
mean the actual color ‘black’ (which no humans have,
but the darkest like Southern Sudanese only come close to having). ‘Black’ simply means having very dark skin, which most indigenous Africans do have.” and later

“…..They called their nation Kemet NOT as a
reference to the river valley silt but to their
actual country. While they called lighter-skinned
Asian and Libyan foes desretyw.

Of course, the Egyptians themselves were not
literally ‘black’ in color and no human being is!
(not even Sudanese like Dinka, but they are close)
They called themselves ‘black’ as a reference to
their dark skin and because they saw the color
as divine. Hence their ancestral god Ausar (Osiris) is known as Kem-Wer literally ‘Great Black’.”

“….Black is a sacred colour. The peoples that were/are
truly black as obsidian or onyx were also sacred in
ancient times- so much so that we took to describing the peoples as the peoples of the black rock- literally the Egyptian term for the Men of Onyx. Nowhere in Tut’s
iconography does he describe himself as descendant of
anyplace but Egypt.
One of the issues here is transliteration.
There are probably seventeen different words for
Black in old Egyptian. In English we have but one
word and it is used ad hoc as a one size fits all
definition of Eurocentrics of old.”

“…. Iman is clearly of the Oryx lineage- the Ta-Seti
and Thomosides are of this stock as is Anwar Sadat.
Alex Wek is of the Black Rock.”

“My family originally came from Somerkot valley
between Dahklha and Khargha. About four thousand years ago, a good percentage of our peoples migrated to Upper Egypt proper. We are a matrilinear tribal clan. Land and water are passed down through women only. During the 13th century B.C.
our ethnic minority was pushed by military force out of
Upper Egypt for a time. Half of us returned
to Dahkla and the others migrated south to the strong
holds of the Inyotef Ta-Seti who in reaction to
Hyksos/ Kushite collusion in the 13th Dynasty-17 dynasty- had taken up permanent residence in a kingdom somewhere in the highlands of Ethiopia probably somewhere near present day Eritrea. ”

“…Naturally, the Abysinnian branch of our family
remained in fairly close contact with the Western Desert
branch from dynastic days through to the Christian era.

“Maahes Hadendoa is another name for Beja groups
along the Nile Valley. Beja, Bisharin, Hadendoa
are all names for the same peoples.”

“…It is clear that Queen Tiye should be respected
as co-regent and acting sovereign as her husband
Amenhotep lies on his deathbed. The fact that Tiye is
of Nilotic descent is never a topic in
the story- and why should it?”

“….Nomadic Peoples of the Black Rock were
simply not interested in political machinations
of the Egyptians. This doesn’t mean there weren’t any
dark skinned African hereditary chiefs mind you-
just no Fur, or Nyala kings in Egypt. The term
Pharaoh is a misnomer and is used incorrectly in
most instances. The Governmental Body is the Per Aa.
There may have been any number of individuals,
be they viziers, hereditary princes, royal wives,
priestesses or administrators whose ethnic origins would have been referred to as stemming from the black rock.”

“…The peoples of the Black Rock are the true blacks.
They own the term. Everyone else should just be happy
that they have permanent tans if they have them that is.
We can’t all be as beautiful as the Black Rock.

Khnum made them better than the rest of us.
I’ve gotten over it. Maybe you should too?
I’m stuck being whatever my ancestors called themselves.
In America I can be Black but I know its like speaking two languages. It can mean one thing in one language and something entirely different in another.

I could never be Black in the definition of the peoples
who share the same ancestral wadis and sebkhets and have forever.
They don’t hate me for it. They have their own incredible
history and culture. I can’t claim it for my own. No one in
my genetic history can claim to have walked back and forth between Chad and Libya since the Holocene. The Peoples of the Black Rock can trace their ancestors footsteps for millenia.”