The Jieeng or Dinka people are a Nilotic tribe from South Sudan, but they do have a significant community in the diaspora. They live mostly along the Nile, from Mangalla to Renk, in Bahr el Ghazal, Upper Nile (formerly two out of three Sudanese Southern Provinces) and Dinka Ngok of Abyei Area in South Sudan.

When one hears the term ‘corset’ we immediately associate it with a woman’s item of clothing, right? Well here is some interesting insight, the MEN of the Dinka tribe; a South Sudanese largest tribe, would opt to differ.

Among the Dinka, corsets, known as “Malual” are worn by men as a form of daily attire which primarily symbolize a man’s age group as well as his wealth within the community. 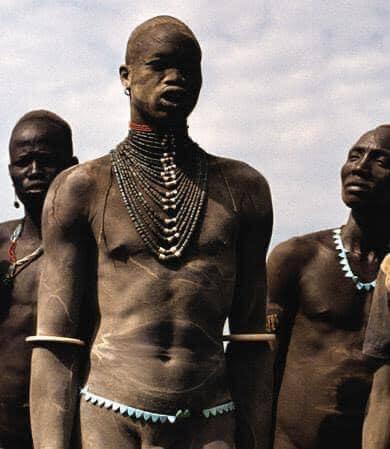 The wealth of a Dinka is measured according to the height of the back of a corset; the higher the projection, the richer the wearer is.

Wealth is usually calculated in terms of their cattle and herd number. These corsets are initially sewn around a Dinka tribe member at a very tender age.

Removal of the beaded garments, which serve as a great representation of the tribes creative abilities, is not initiated until the wearer reaches a certain age, usually when he is ready for marriage.

The ‘malual’ can therefore usually worn for over 15 -20 years before removal and are raised in height ever so often.

Different colour combinations featured on individual corsets signify a wearers age bracket. Red and blue cominations indicated a man of fifteen to twenty years of age whilst blue and yellow would usually be worn by men of thirty years and above.

Dinka herders of a younger age group can be identified by the height of their corsets.

The Dinka traditionally view the body as a focal point for artistic expression and what better way to be expressive then adorn ones body with carefully crafted pieces like these beaded corsets.

The beauty of the Dinka corsets have influenced fashion and costume designs worldwide. Interpretations of the Dinka corset have been worn by characters in the musical stage adaptation of world known animated film,”The Lion King”.

As well as this, prominent fashion house Christian Dior adapted the dexterity and bold design behind these corsets to create pieces for his Haute Couture 1997 collection.

This definitely serves as proof of how African traditional culture has been adapted, interpreted and recognised world wide