In South Sudan in 1919 Dinka Aliab, inhabited an area west of the upper White Nile River. The tribesmen were tall and fit-looking cattle herders who were adept at using spears.

The shared governing authority in the Sudan by then was a joint Anglo-Egyptian condominium in which the British had held the higher administrative positions and Egyptians held the lower ones.

But nobody did much to help the Dinka tribesmen, who were expected to pay tax and to provide labour for the Hakuma (government) on demand, without the tribes receiving any economic benefits.

Unscrupulous and corrupt policemen and administrators misused their authority to profit from the tribes-people, and resentment grew.  The British were unaware of this as their representative; the local inspector did not know how to speak either Arabic or Dinka.

The outbreak of conflict between Dinka warriors and British troops

There lived a man and a great fighter called Kon Anok Nyengeer who was Dinka Aliab leader. Dinka Aliab under Kon Anok never liked British Colonialism and British system of paying tax yet they did not benefit from it and for reason that British occupied their land Pap.

On 30th October 1919 3,000 Aliab Dinka men attacked the police post at Mingkaman known as Guolyier, near Bor.  Many of the British policemen were killed and Dinka Aliab captured police posts, news of this uprising being sent to the Provincial Headquarters at Mongalla.

At the same time Mundari tribesmen who lived just south of the Dinka area attacked and killed some telegraph linesmen and police. 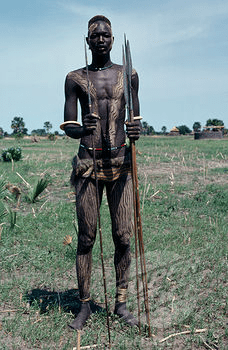 White’s troops had the firepower but the Dinkas had courage, knowledge of the ground and superior tactical ability.  Stigand went out on patrol himself, and on 8th December 1919 whilst the British were moving through long grass around one thousand Aliab Dinkas sprang an ambush.  Stigand, White, El Yuzbashi (Captain) Saad Osman and 24 soldiers and porters were speared to death by Dinka Aliab.

At the end of the day the British troops had been humiliated and their prestige was in tatters.  Roberts conducted a fighting withdrawal to Tombe where.

Darwal established his force at Pap and tried to fight back Dinkas.  The British patrols were slow and unwieldy and initially the tribesmen and their herds could avoid them. About 400 Dinka, Atuot and Mundari tribesmen were killed in the battles.  Kon Anok later died of poison. Source: Peter Baxterhistory