The Kru tribe, tough people that refused to be captured and taken away for slavery

The people of Kru are a tribe of West Africa from South-Eastern Liberia and the neighboring Côte D’ivoire. Kru migrated and settled in different parts of the West African coasts, in particular Sierra Leone, Freetown, Cameroon, and Nigeria. It is said that Kru people have historical relations with Nigeria’s Ijaws.

The Kru tribe who made fishing and trading as their primary activity was majorly known for their seafaring and strong history of resistance to be captured for slave trade by European slave traders, that was when Liberia was called the Republic of Maryland.

Often, Kru people would first take their own lives, or fight fiercely to avoid getting caught and taken away.

They were also said to have rejected the efforts of settlers to control their trade and were labeled as difficult and less valuable in the slave trade because of their toughness.

They’ve also been reported to have tattooed their foreheads and nose bridge with indigo dye to distinguish them from the slaves.

The Kru tribe was made up of 24 sub-clans with differences in language dialect and some cultural norms. Their political organization was traditionally not centralized, every subgroup of Kru tribe inhabited number separate settlements.

And apart from their dominance of resistance, the Kru were distinguished by the ability to effectively monitor the seas. Their canoeing and surfing skills earned them a good knowledge of the fast ocean currents that later gave them work on British merchants and warships. 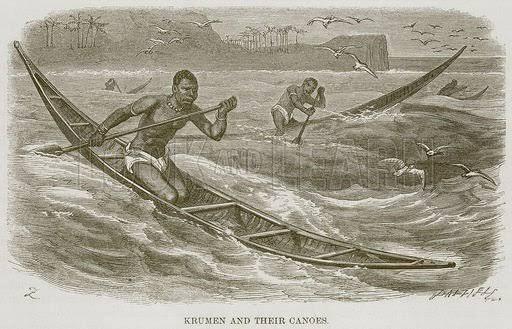 It has been documented in European history that the people established mutual relationships with European traders and explorers prior to the arrival of the freed-slaves from North America to West Africa.

It is from this relationship that the Klao ethnic group was known as Kroo or Kru by the Europeans in this region. Kru’s name emerged from the word ‘gang.’ They were given the name as a result of their career.

Today the Kru is one of Liberia’s many ethnic groups, numbering about 7% of the population. Their language is one of the key languages spoken, too.